The Polish President, Lech Kaczynski and his wife Maria died in a terrible and tragic crash.  Many government leaders and staff were with him. 96 people perished.  It is a tragedy for the Polish people and is a reminder that no matter our station in life we are still subject to the randomness of life. 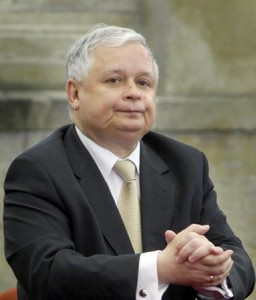 It is unclear what caused the crash although initial reports blame the weather and the decision of the pilot to try to land in the turbulent weather. There was certainly thick fog. They were just outside the city of Smolensk, Russia.

Poland was once home to more than 3 million Jews before World War II.  It was a thriving place of Jewish learning then.  Warsaw and Kraków in particular were central pillars of the Jewish community.  Today the Jewish community of Poland is small.  But they are trying to rebuild life there.

In Warsaw, there is a Reform synagogue called Beit Warswza.  The rabbi is an American. A friend of mine.  Rabbi Burt Schuman who once served the community of Altoona, PA. But he tells of a revival.  Of young Poles who are trying to rediscover hidden roots from the era of World War II.  Young Russians who are resettling and learning about their Jewish heritage.  It is amazing what is happening there given Poland’s long history of Anti-Semitism, fueled in part by an Anti-Semitic Catholic Church.

The Polish President didn’t appear Anti-Semitic. In fact he built strong ties to Israel.
But he was homophobic and tried to squelch the human rights of gay people. He even made it a centerpiece of his election. You have to wonder will people never learn to dehumanize?  He was going to commemorate the 70th anniversary of a massacre of Polish army officers in the forests of Katyn by the Soviets.  One would have hoped a man like him might have connected the dots of his own homophobia to what happened in the forest so long ago.

Nevertheless he was their elected President and we can only imagine the grief of a nation whose has lost their leader and many of their leaders including the Chief of the Army and the head of the Polish banking system and many of their Congress members.  May God bring comfort to their families and to the entire nation.