Today is Yom Hazikron -Israel’s Memorial Day. It is a day to remember all those who gave their lives to defend the State of Israel.  Throughout its more than 60 years Israel has had to defend its very existence from hostile neighbors.  In 1948 it was Egypt and Jordan, Lebanon and Syria.  And today Hamas and Hezbollah terrorists take aim with missiles and rockets supplies by Syria and Iran.

The Israel Defense Forces have kept Israel safe and free throughout these years.  No army is perfect.  But the IDF has conducted itself with honor and dignity.  And when there has been any question it has conducted deep inquiries.

Today all of Israel will pause to remember as the siren blares.

We can’t help but also remember Gilad Shalit who was captured almost five years ago by Hamas.  An Israeli soldier who remains in captivity in the Gaza Strip.  He was kidnapped across the border and Hamas has refused the Red Cross from even visiting Gilad.

There is a tent to outside the Prime Minister’s house set up by his parents to keep Gilad’s cause alive. Here is a picture: 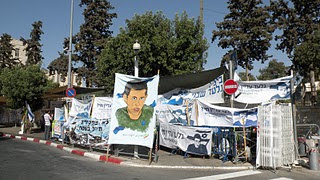