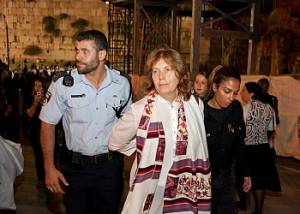 My friend and colleague Anat Hoffman director of the Israel Religious Action Center and one of the founder of Women of the Wall (www.womenofthewall.org.il) was arrested last night at a Rosh Chodesh celebration with the Hadassah Women from around the world. The women of Hadassah are in Israel celebrating their 100 year anniversary of this wonderful Jewish women’s organization known for its philanthropy  in the United States and in Israel.   Anat has been arrested at the Kotel before.  The Women of the Wall group gathers each Rosh Chodesh at the Western Wall for a morning service to celebrate the new month. This half holy day associated with women is a time for women of all denominations to come together to pray and read Torah.  But they are not allowed to read the Torah in the Kotel Plaza area.  The Rosh Chodesh group continues to point out the inequities at the Wall.  Men have most of the area near the wall for prayer and meditation and reflection and the women’s section is small. An Israeli Supreme Court ruling said that they could gather but this group had to read Torah in a different section near the southern part of the wall.  Not in the main prayer place.  They also arrest members of the group and detain them for wearing a tallit which is common among women in Reform, Conservative and Reconstructionist Judaism.  Tallito have to wrapped around like a scarf not in the traditional manner of wearing a prayer shawl.

Anat was arrested for reciting the Shema-the prayer that unifies the Jewish people world wide.  She was detained overnight and although a familiar site to the police who guard and protect the wall was evidently treated very poorly by the police.  Now is our time to strengthen our support for Women of the Wall and the values of equality-even in Israel.   We must stand for our place and our Jewish ideals too.

Take some time to donate. To visit their website.  And the next time  you are in Israel at Rosh Chodesh go and take part in the service.  Men stand on the men’s side near the divider to protect the group of women praying from flying objects on the men’s side over the Mechitza and pray together with the women and then all proceed with the Torah to the site for reading of the Torah.  This is for equality for all people and all who believe that the Holy Sites of Judaism should be open and available to all Jews.