I just concluded the second full day with the Rabbinic Mission of AIPAC. AIPAC is the American Israel Public Affairs Committee and their mission is to be an effective lobby and bridge for Israel in the United States. Today I will always remember from this mission a puff of cloud.

While AIPAC is best known for making sure our American Elected Officials, Academics, and business leaders understand Israel, visit Israel and build relationships with their Israeli counterparts, this is the first time they have had a rabbinic mission to Israel. You can follow us on Twitter at #rabbinicmission2israel.

There are 20 rabbis mostly Reform and Conservative rabbis and one Modern Orthodox Rabbi in our group. Today we were supposed to have travelled to Ramallah to meet with a member of the Palestinian Authority and an important Palestinian political academic. But due to the changing situation here in Israel we were unable to go to Ramallah and the high ranking member of the Palestinian Authority was unable to leave Ramallah. But we did meet at the American Colony Hotel in East Jerusalem with an important Palestinian political academic.

He shared with us the most recent polls of Palestinians in the West Bank and Gaza and their attitudes toward peace. They also surveyed Israelis and asked them prospects for peace. Among Palestinians there is clearly a generational divide. Those 35 and older according to his polling are willing to accept a two state solution and are willing to accept Israel side by side as a matter of pragmatic consideration. But those 34 years and younger are more militant and will only accept a one state solution. This means Palestine only to the sea. He told us most Palestinians are secular and that only 25 percent want an Islamic state run by Sharia law. Seventy five percent of Palestinians was a democratic state. However the PA is a basically a two party entity, much like the United States. Hamas and Fataq. There are smaller parties but the two major groups gather 80 percent of the vote.

Our afternoon included a visit to the Jerusalem neighborhood of Gilo which is on the far southern end of Jerusalem and was built beginning in 1967. It is annexed into Jerusalem and overlooks Bethlehem which is in the Palestinian Authority on the other side of the security fence.

We then spent a couple of hours at the Foreign Ministry learning about the challenges of Israel at the United Nations and a marvelous hour learning about MASHAV which is a department of the Foreign Ministry it is Israel’s International Agency for Development and Cooperation. Founded by David Ben-Gurion in 1958 this Agency works with countries around the world on issues of food sustainability, agriculture, health education, emergency response, and early childhood education and gender empowerment. They help developing nations around the globe and help by providing expertise and hands on experience to lift their nations up. Mashav works in countries like Cameroon, Ghana, Kenya, Eastern Europe, Micronesia, India, Indonesia, Ivory Coast, Burkina Faso and Rawanda.

But just as we were learning more about Mashav. A blaring announcement came through the building, “Red Alert, Red Alert” with piercing sirens. Other employees joined us in the conference room we were in as it was a reinforced safe room. Four rockets had been launched at Jerusalem and we heard several booms. As the all clear sign was given and we exited the building, we could still see the cloud puffs where the Iron Dome had taken out the rockets.

We ended the day over dinner in a private home in Yemin Moshe (the Windmill neighborhood). Dr. Einat Wilf, a former member of Knesset with the Labor Party ( I met her last summer) gave a brilliant talk about the future of peace and the challenges and hurdles and opportunities between Israel and the Arabs.

There is no let up in the rockets landing all over Israel. Hamas has launched 400 rockets. There are only 6 Iron Dome batteries and Israel needs 14 to protect its cities.

Hamas who after 2008 was not supposed to have any more rockets has not only resupplied but has more sophisticated weaponry thanks to Iran. They used to only be able to reach Southern Israel. But now they can reach the entire nation.

The Israeli army has been firing and trying to take out rocket launchers and Hamas leadership. While civilian deaths are regrettable and deeply painful, Hamas uses them as human shields. Israel’s army not only leaflets before they shoot but they call the families to leave the buildings. What other army in the world calls the civilians and tells them to get out? Can you imagine Putin doing that in the Ukraine? Or the Taliban in Afghanistan? Or al-Sissi in Egypt?

The situation is complex here in Israel. And it has many nuances. And there isn’t time to recover from one trauma before there is another. But we in our comfort of the United States have no idea what it is like to try and run to shelter. And if you live in Sderot you only have 15 seconds. And in Tel Aviv 30 seconds to find shelter.

Yes we pray that there will be peace. And let us never lose that hope. And let us continue to urge Israel and her neighbors sit down and talk. And we should support organizations that help Israelis and Palestinians encounter one another. But this Shabbat will not be that time. 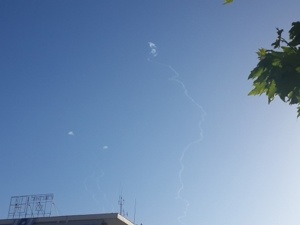