The news seems grim. With deep sadness another journalist is murdered
by ISIS. This time we mourn Steven Satloff who was beheaded in a
horrific video like his fellow prisoner and journalist James Foley.
Steven Satloff grew up in Miami, Florida at Temple Beth Am. He was a
Reform Jew. He went to Jewish Day school. His mother who many of you may have seen pleaded for his
life in a video she made last week and was broadcast on Al-Arabiyah
television.  She taught religious school at Temple Beth Am for many
years. He had both Israeli and American citizenship. He went to University in Israel.

He wrote for the Jerusalem Post and freelanced for Time magazine and Foreign Policy
magazine.
He was an observant Reform Jew who fasted for Yom Kippur even while
held in captivity by ISIS although often fed just one meal a day. He
pretended to be sick refusing his only sustenance which on that day
was eggs. But his spiritual sustenance also sustained him through the
terror of his captivity. As we say kaddish for Steven this week let us
be inspired his courage, his faith, his commitment to tell the stories as he saw
them. May his family find comfort among all who mourn in Zion and
Jerusalem. And may his memory live for a blessing 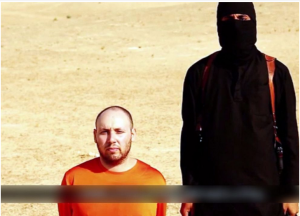